A friend had asked how I would approach using a regression model in R on this data set to determine if weather has any impact on Uber usage in New York City. I was intrigued to know the result and thought this would make a good first blog post. A call out to Yannis Pappas for making this dataset available. http://www.yannispappas.com/Exploring-Uber-Demand/

To recap, Yannis compiled the Uber Pickup data from the first 6 months of 2015 (from Kaggle), weather data from the National Centers for Environmental Information, LocationID to Borough mapping (by FiveThirtyEight) and NYC public holidays. He aggregated the data by hour to arrive at 29,101 records.

We load the required libraries and the uber.csv file.

I will use the Variable Importance results of a Random Forest to determine the degree to which weather related variables explain variance in Uber pickups.

First, a few intuitions. As I am interested in NYC as a whole, I will consolidate the data over the boroughs. I expect the day of the week adjusted by the holiday variable to be the primary driver of the Uber pickups. My next step will be to create new date component variables and use those variables to generate a baseline model. Then I will look to see to what extent I could improve the model results by introducing weather related variables. My initial thoughts are that rain and snow are the most likely elements that would impact Uber (or taxi for that matter) usage. As for rain, I expect people would not be concerned with previous precipitation, but current state and short term predictions of rain. As for snow, I don’t think people in NYC are that bothered by it when it is coming down, but accumulation could make it harder for those who otherwise were intending to walk. That being said, NYC is pretty efficient at clearing up snow, so likely only accumulation over a recent short time period may prompt people to take an Uber. Based on these initial thoughts, I will work on creating a few new variables from the data.

Let’s take a look at how these date component variables correlate with the Uber pickups. 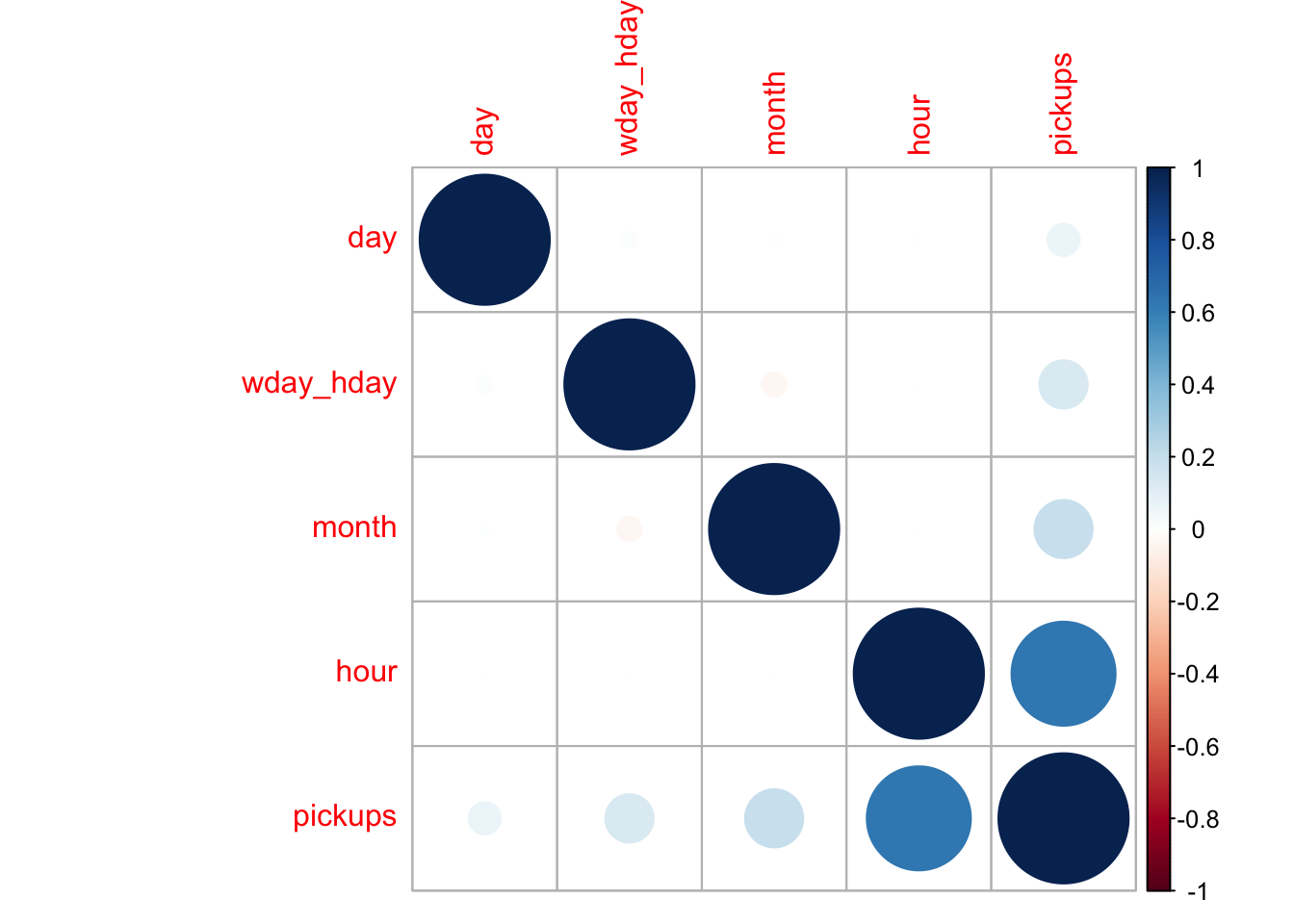 Let’s take a look at the distribution of pickups over the values of these date variables. 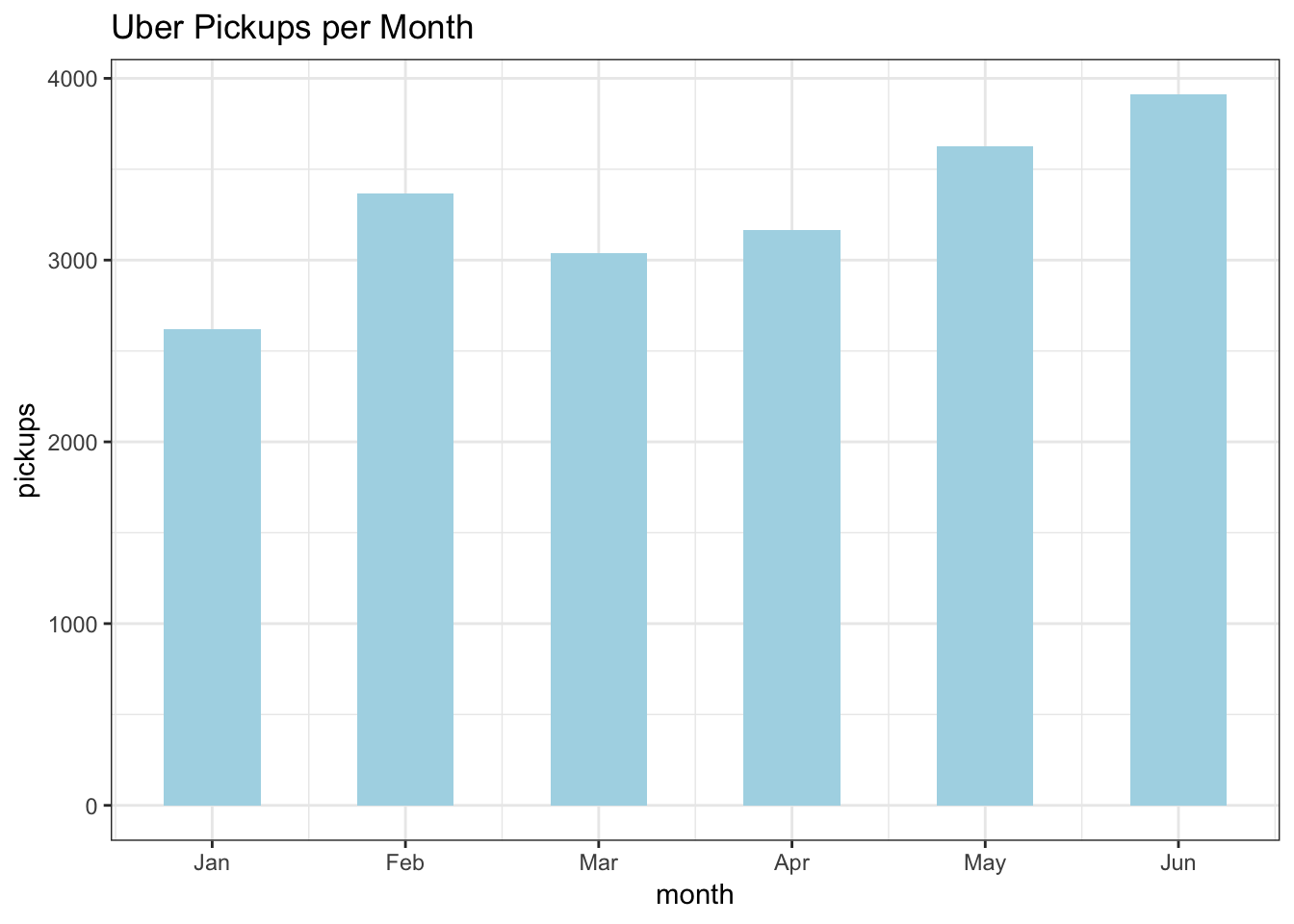 With the exception of February, there is a month on month upward trend in pickups. This trend is likely explained by growing demand and popularity of the service over the course of 2015. It was a year when the number of Uber drivers doubled. https://www.businessinsider.com/uber-doubles-its-drivers-in-2015-2015-10. 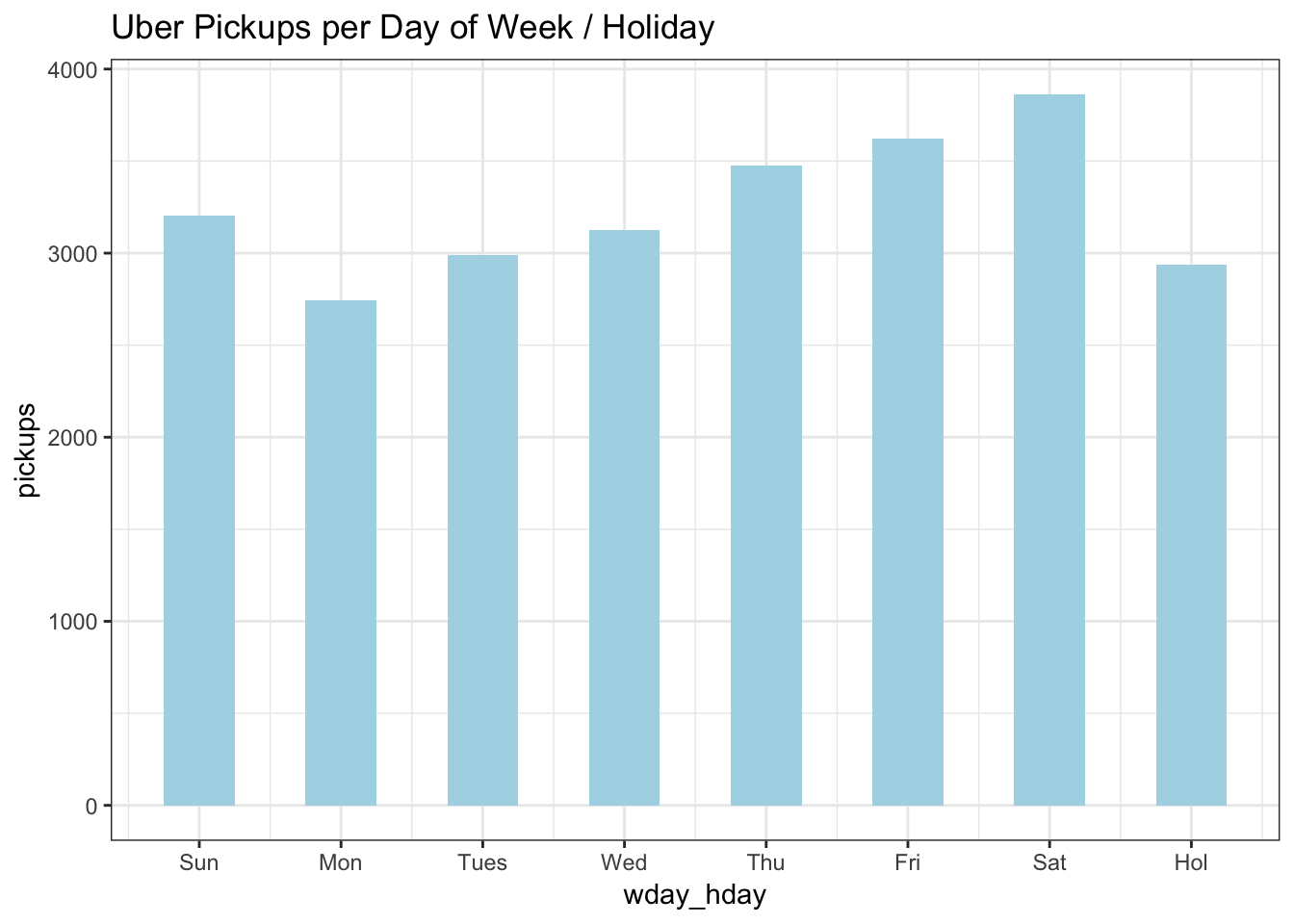 Ridership increases Monday through Saturday then tapers to mid-week levels on Sunday. Holidays had low ridership on a par with Mondays so I overrode the day of the week value if it were a holiday and created an 8th category, giving new meaning to 8 days a week. 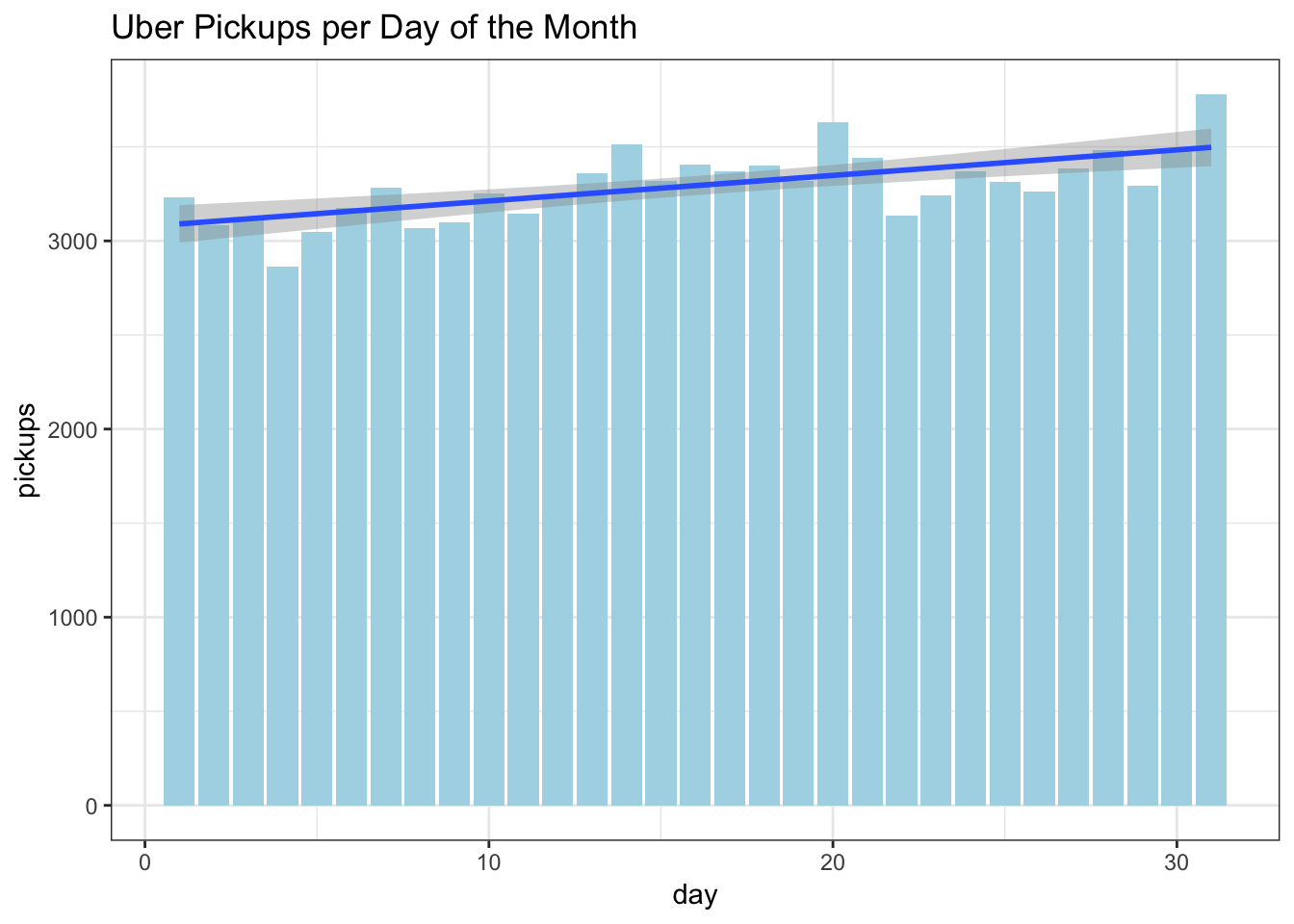 Above when we looked at the correlations, we saw a negligible increase in ridership over the course of the month. One point I found fascinating is that the peaks are around mid-month, the 20th, and the end of the month. A colleague of mine who commuted many years between New Jersey and Westchester, NY had suggested that traffic was worst on those days that correspond with paydays, mid and end of month for those who get paid bi-weekly, and around the 20th for those who get paid monthly. I haven’t found any research that supports that so it may be the subject of a future little project. 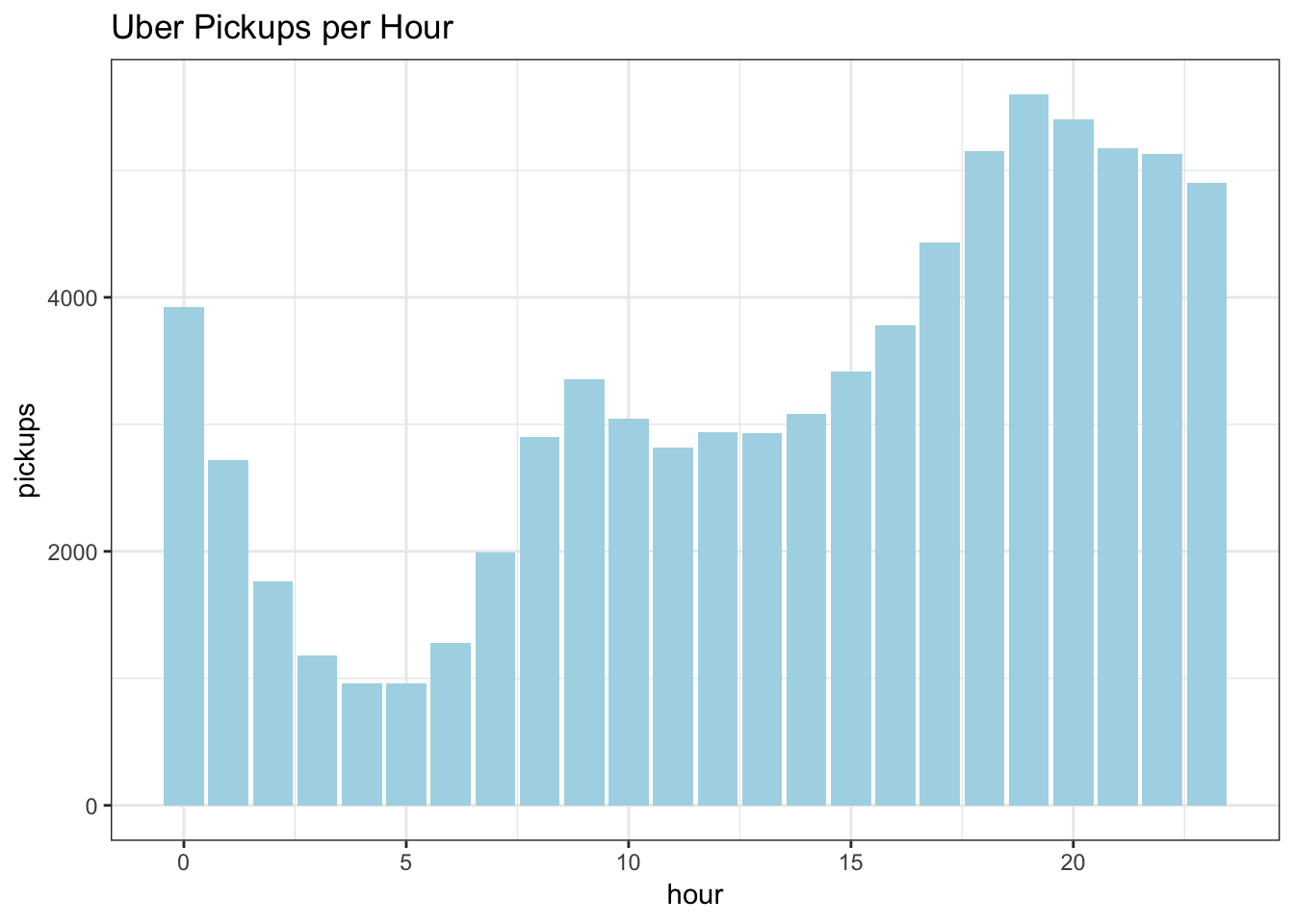 The impact of the Hour variable is quite clear with Uber pickups increasing in the morning rush hour, tapering a bit in the early afternoon, picking up for the evening rush, keeping high throughout the evening, then dropping off in the early morning hours.

Let’s run a model with these variables to see how much of the variance in Uber pickups they explain. Since we are looking to understand the amount of variance explained, we will use RSquared as the metric. 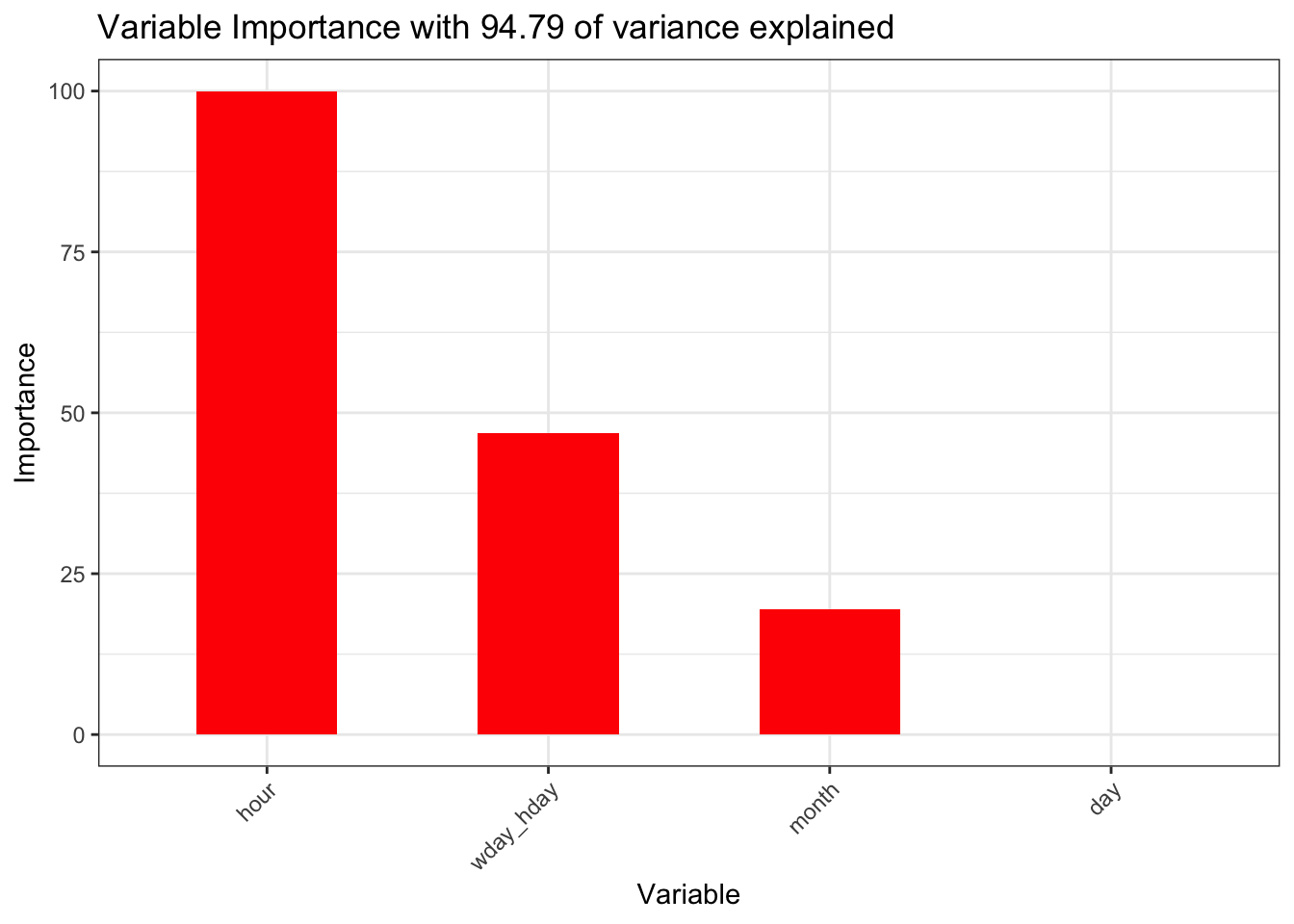 The hour, wday_hday and month variables account for 94.79 of the variance. That is the baseline we now need to see if we can improve upon with the weather related variables.

We will start again by looking at the variable correlations with the target variable and this time also check for high correlations across variables. 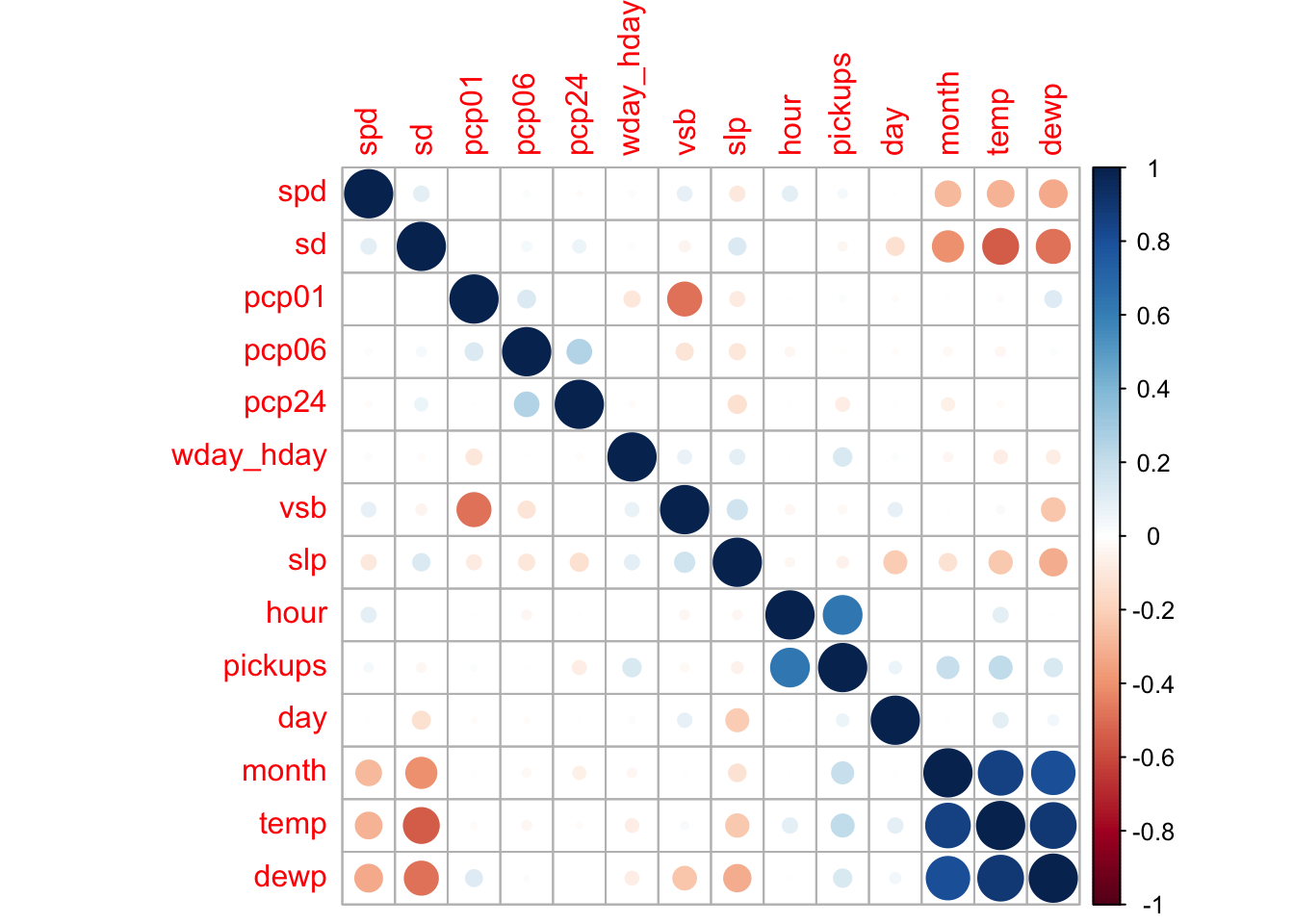 Let’s start by taking a look at snow. 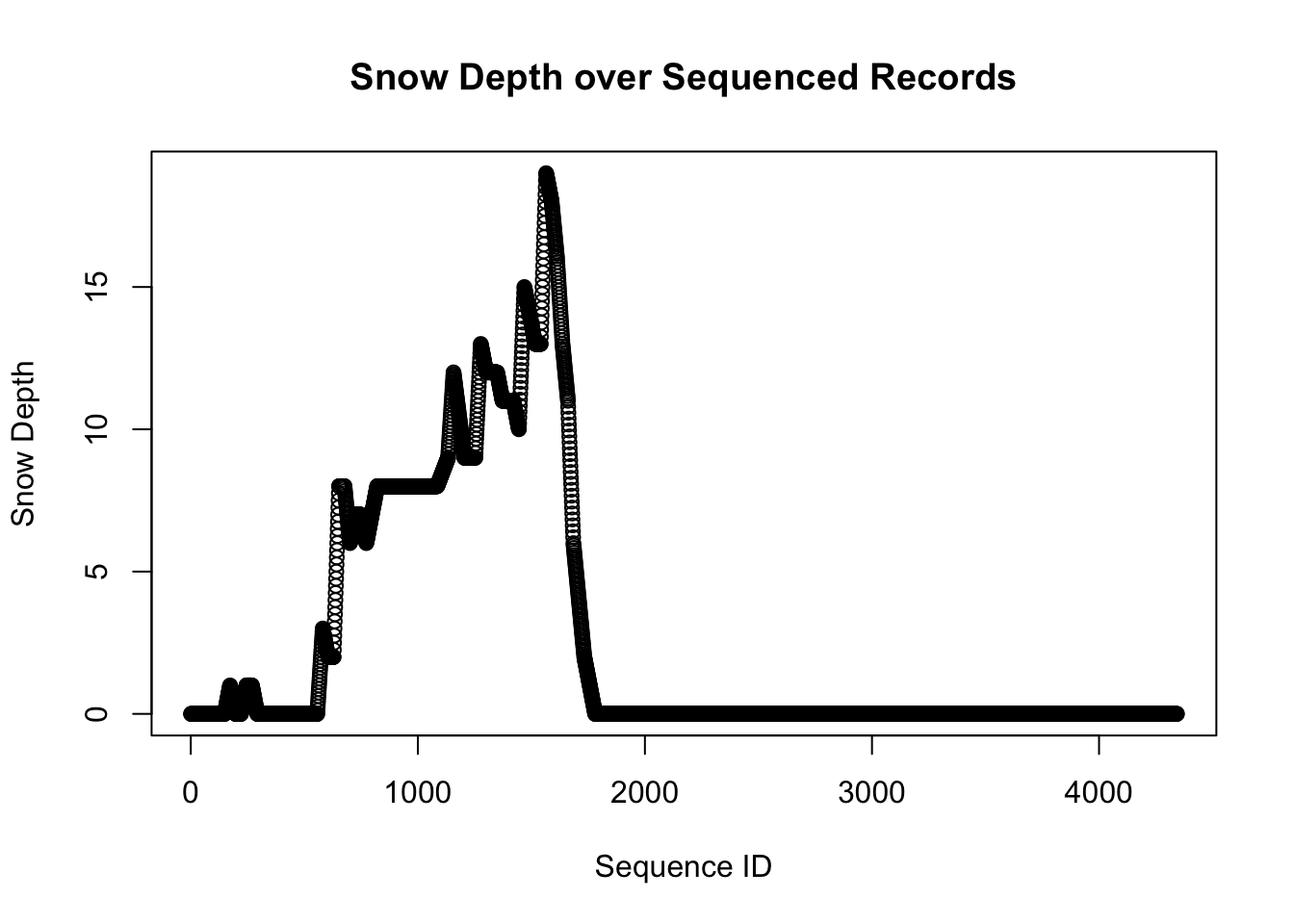 The sd variable measures snow depth. From the graph we can identify periods when the snow is accumulating and periods when it is melting. We will define a new variable to measure the amount of snow fall when the sd value is increasing. 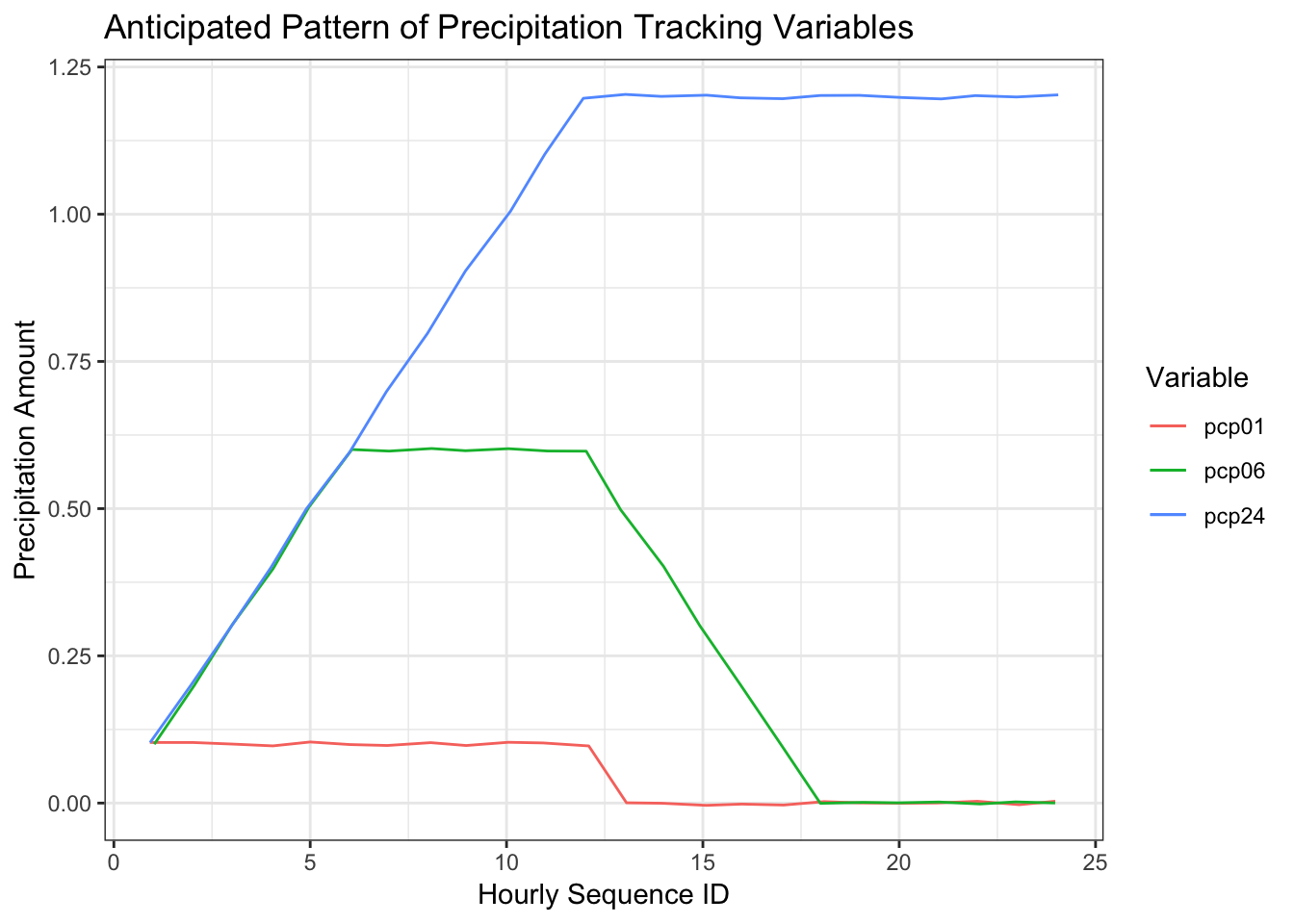 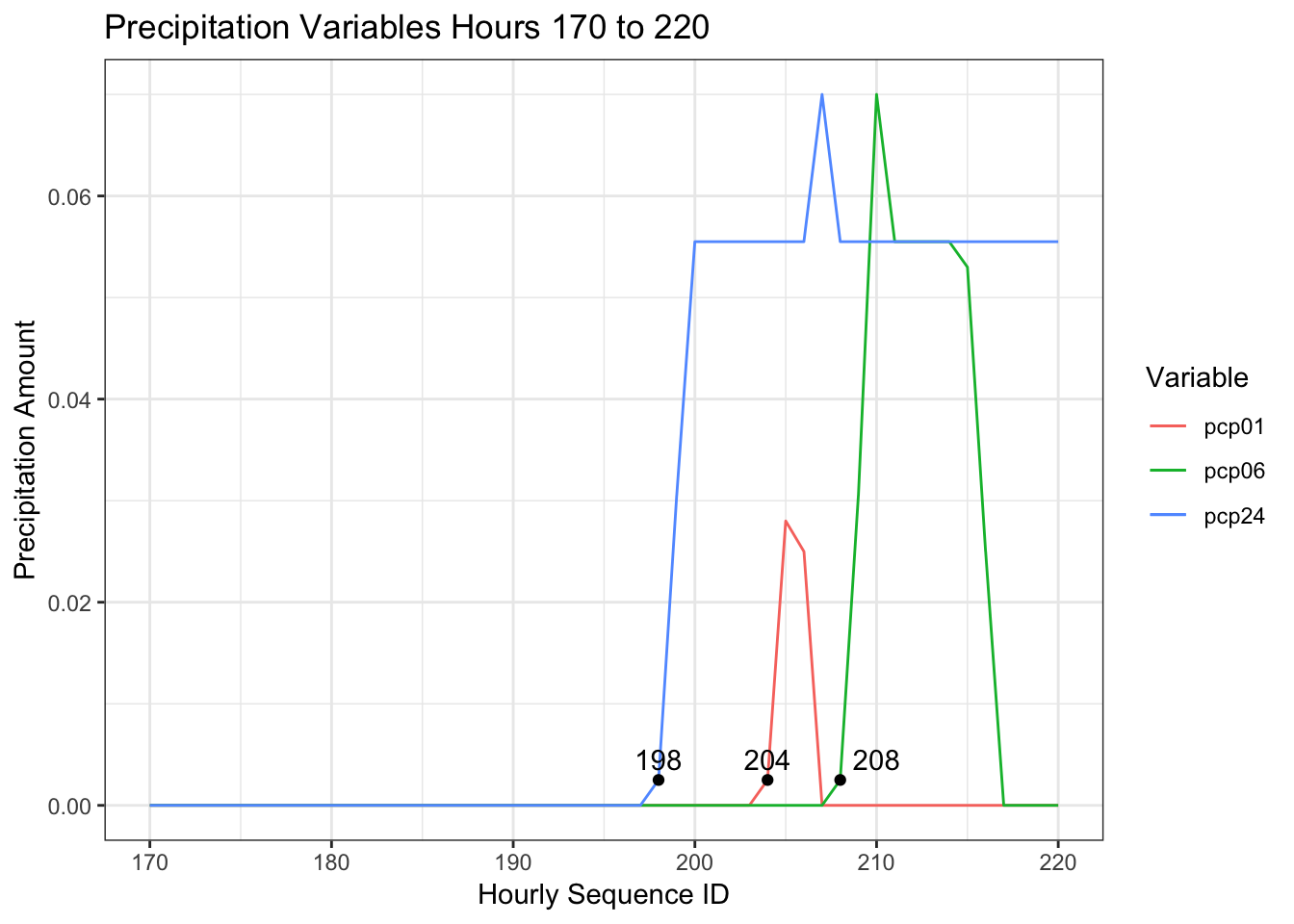 This graph maps the precipitation variables from around Jan 7th, from the 170th to the 220th sequential hour in the data set after a period of more than 24 hours with no liquid precipitation. This sample parallels the hypothetical example I created above to demonstrate how the accumulation variables should work. Contrary to what we saw in the hypothetical example, the three variables are out of synch. I am going to assume that the 1 hour tracking variable is correct and the other two are wrong. Will create two replacement variables based on pcp01. 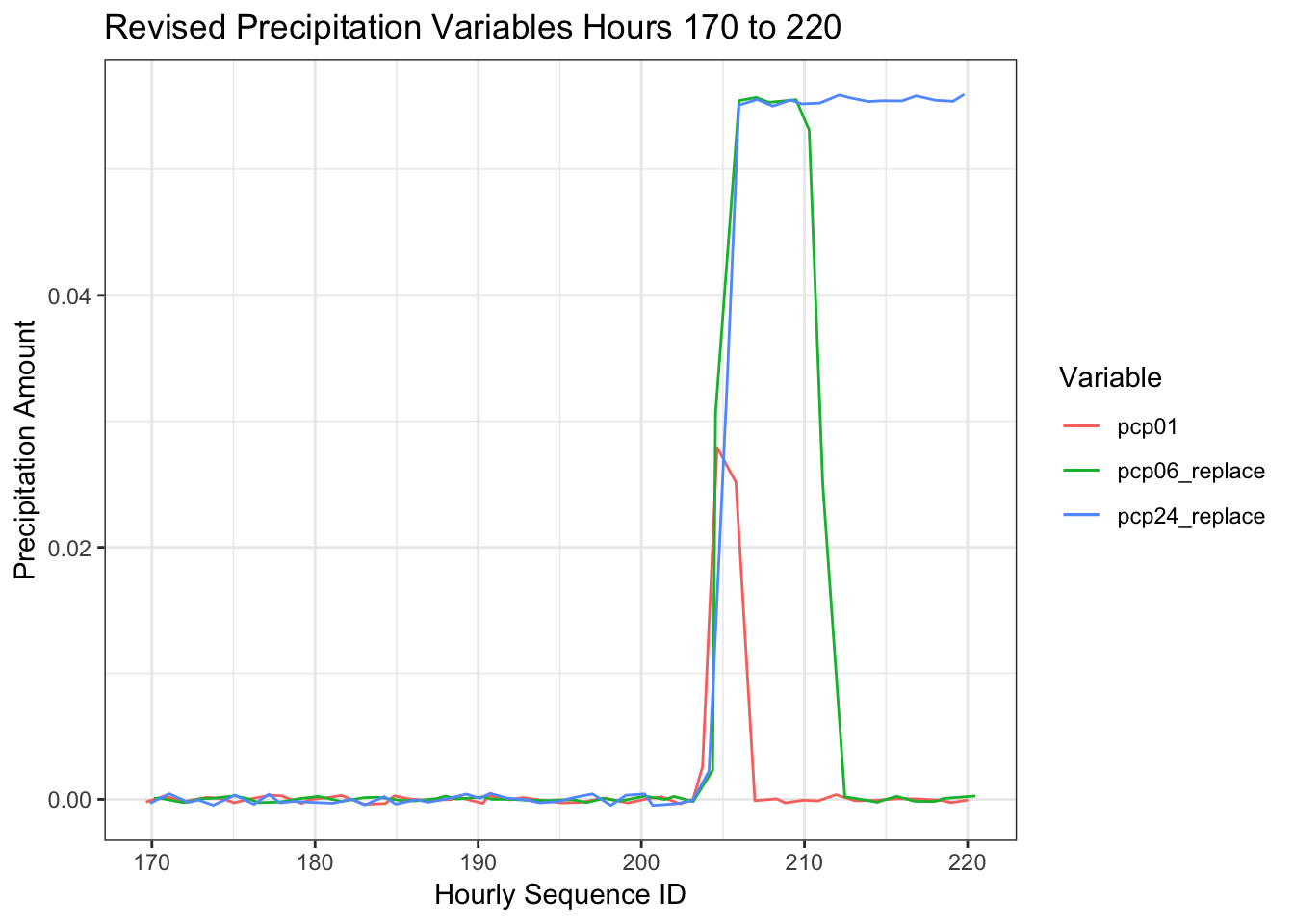 These variables now act as expected though I doubt they will have an impact on Uber pickups. I will show the correlation plot one last time as there are a few other issues that have emerged that reflect the fact the data set is over a relatively short period of time. 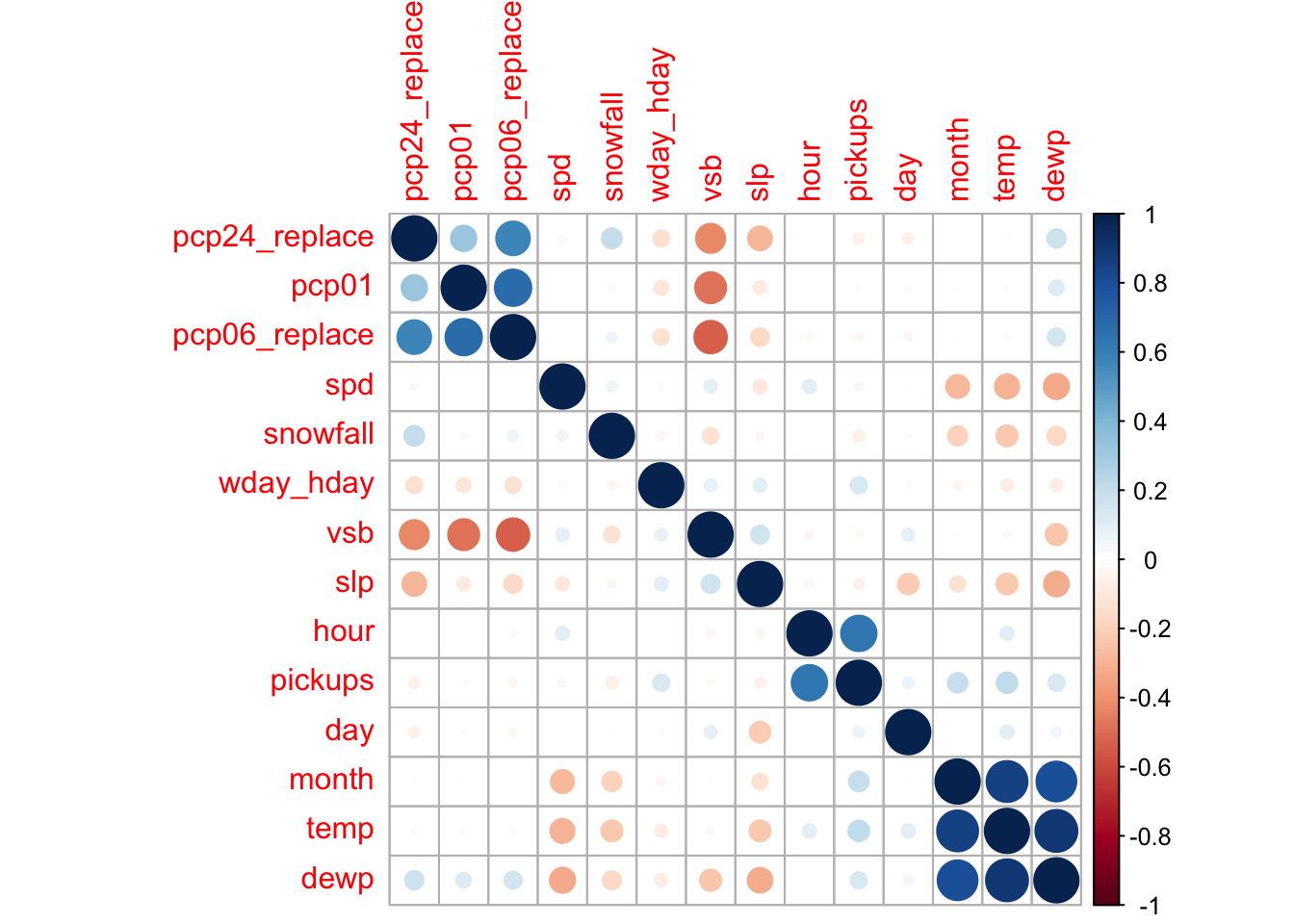 On the positive side, we can see that the relationship between visibility (vsb) and the precipitation variables is stronger which suggests these variables are now more in synch. It is a similar situation with the sea level pressure variable (slp). On the not so positive side, we see minor negative correlations between the precipitation variables and day of the week (wday_hday), and between both sea level pressure (slp) and visibility (vsb), and day of the month (day). If you were to plot the pcp01 variable by the day of the week, you’d see that over this period, more rain tended to fall on the first three days of the week. The plot below between the day of the month and sea level pressure suggests that 6 months of data is not enough to completely randomize the relationship between these variables. 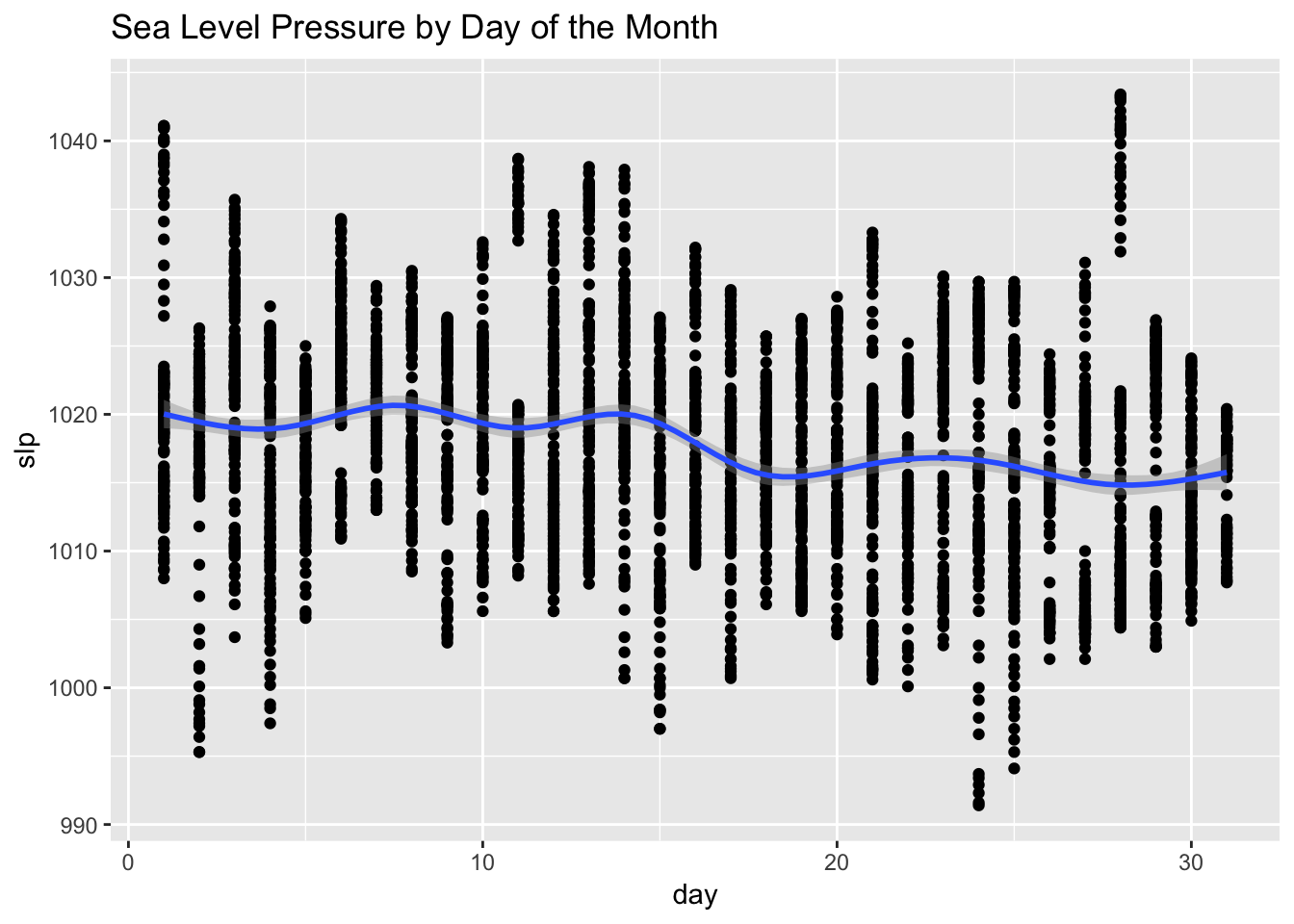 Importance of the Weather Variables

Ultimately, after running a multitude of scenarios that included weather related variables, this is the set that explained the most variance. 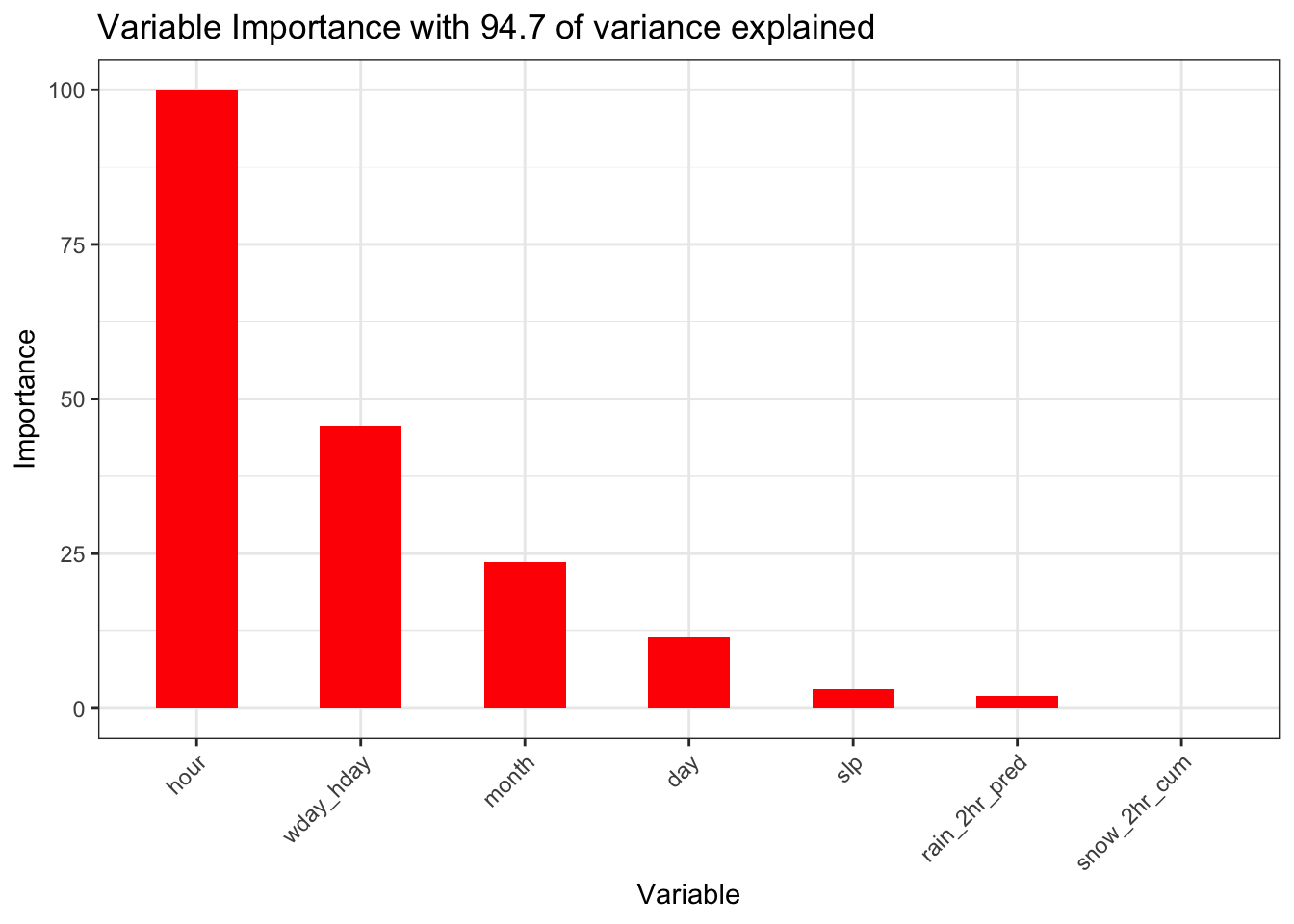